Version two of my binary clock electronics project, using a Raspberry Pi. Written in C++ with a threaded web server for front-end configuration. 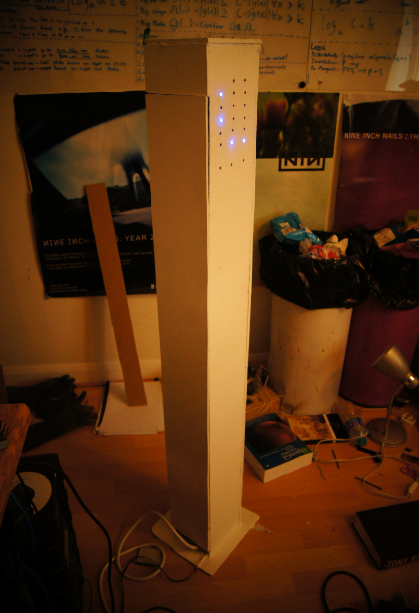 The purpose of this project was to experiment with the Raspberry Pi, electronics and C++; I also wanted to create a new binary-clock with internet-updated time, the ability to set multiple alarms by using a web-browser (alarm clock), a multi-threaded custom-written web-server and room automation based on sensor data.

This was a continuation of an older, version one, binary clock (pictures at the very bottom of the page).

The following section is about the 74HC595, an integrated-circuit with 16 pins; the 74HC595 is practical because eight pins can be utilized as output’s and multiple IC’s can be connected in series - it’s also very cheap. To control 17 LEDs to display binary time, we shall use three shift registers (allowing for up to 24 outputs)…which requires only three output pins from our Raspberry Pi. 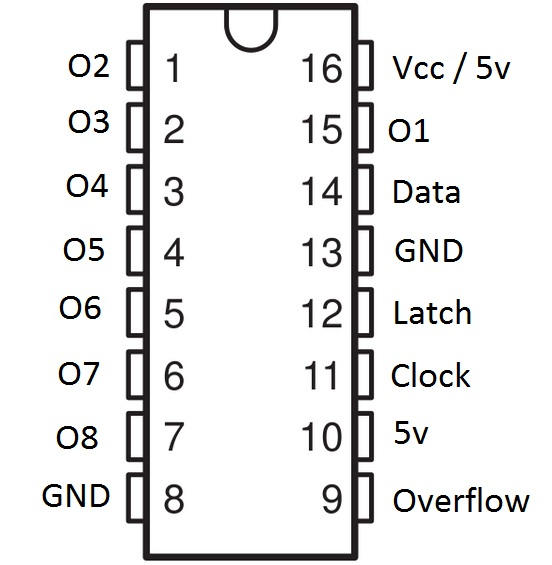 To control each of the eight output pins (O1-O8), we must communicate using three pins (which are connected to our Raspberry Pi):

Therefore to set the eight outputs of a shift register to on/off, we would do the following:

The clock and latch is therefore connected to each shift-register using the same circuit, hence for our 17 LEDs we end-up with the following circuit (click to open the image): 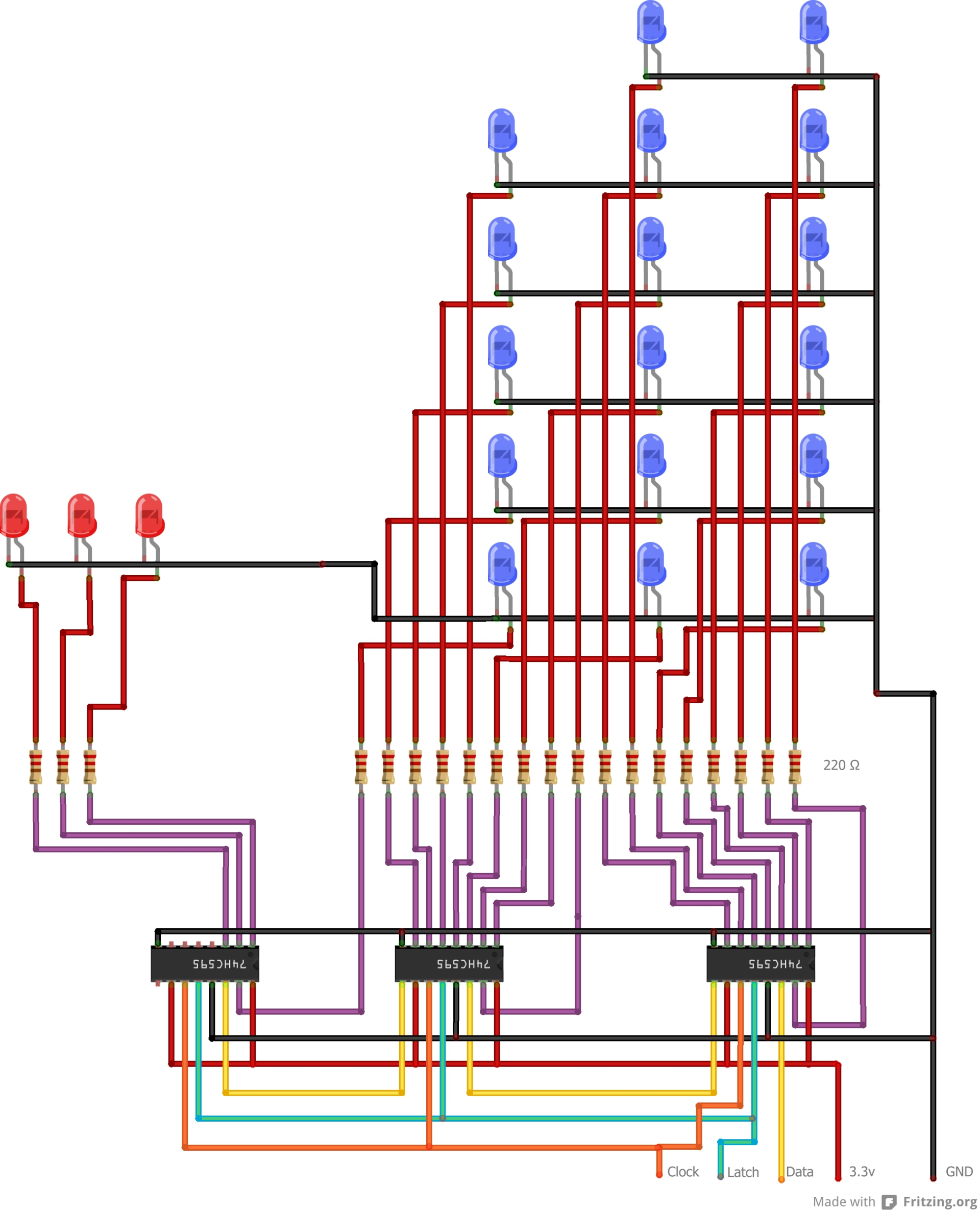 This diagram may look scary at first, however follow the circuit for the data-pin and re-read the above paragrah - you should see that the primary/first shift-register is the right-most shift-register.

In this video, a simple binary count is performed to test the circuit on a bread-board:

I do not have the actual code available for the above test, due to corruption with the Debian image; however the code used the shiftOut function of the WiringPi library, which worked something like this:

I then improved the code by creating a wrapper to allow for multiple shift-registers:

Since my new binary clock will be responsible for partial room-automation, I wanted to add sensors; using sensor data and specified thresholds, certain electrical appliances can be turned on/off etc.

Since I decided to use a photo-resistor and TMP36 temperature sensor, we require analogue inputs to read their values; however the Raspberry Pi does not have any analogue inputs (only digital / high and low). Therefore the solution is to use an analogue-to-digital converter, which translates an analogue signal (0 to 1023 - since the MCP3008 has a 10-bit resolution / 2^10-1=1023 ~ we subtract one since we start at zero of-course) to on/off (compatible with our Raspberry Pi); I have decided to use the MCP3008 because it’s fairly simple to use. 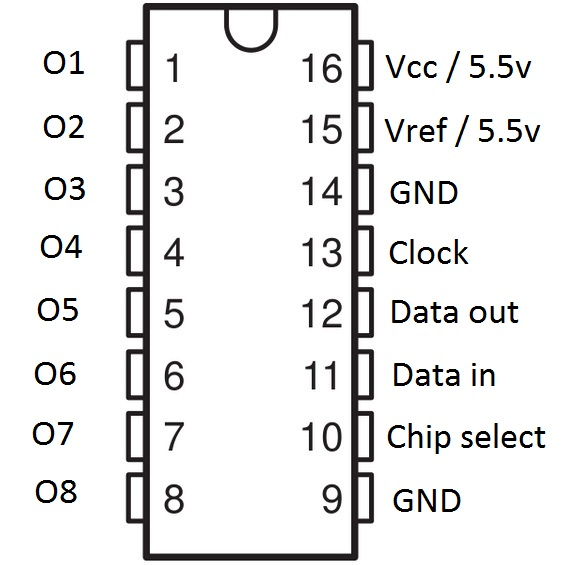 The MCP3008 requires four pins on the Raspberry Pi:

According to the data-sheet, the following takes place to read a single-pin on the MCP3008 (which has eight analogue inputs): 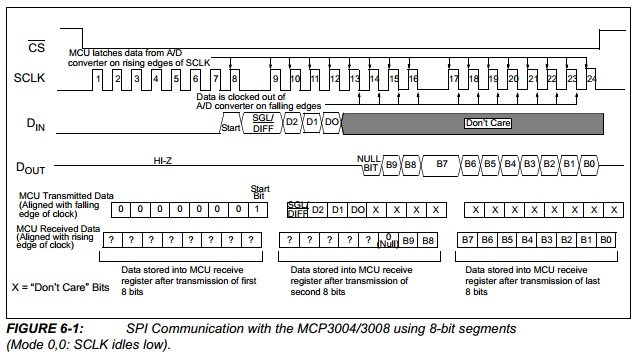 Transmitting the Pin to be Read

Therefore to read a pin we need to transmit the following on the data-in pin:

Reading the Value of the Pin

After the above takes place, we then need to read data from the data-out pin:

During each read, we will toggle the clock (set it to high and then low) to inform the MCP3008 we have read the data-out pin.

Hence to read the value of a pin on the MCP3008, using the previously mentioned procedures and communication diagram, we do the following:

This is the following function I wrote, with help from a Pastebin entry by Dvanhaeke for transmitting the five-bits:

If you’re still unsure, I would also recommend reading the article by Jeremy Blythe from his article on the MCP3008.

I am using the MCP3008 to read the temperature and the amount of light using a photo-resistor; the circuit looks like the following: 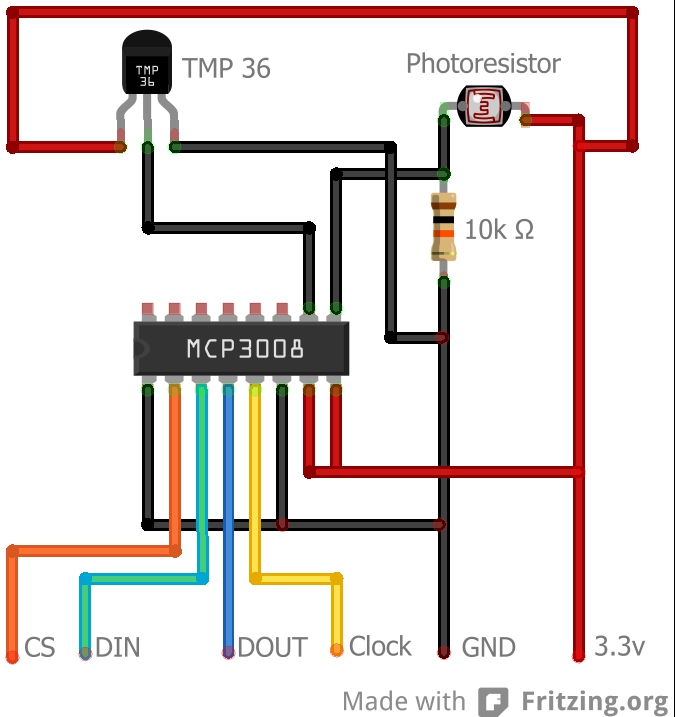 The photo-resistor simply requires 3.3v to one pin, it doesn’t matter which end; then you need to wire the other pin to an analogue-input and have the same wire also connected to a 10k resistor, which is then connected to ground. The way the photo-resistor works is by specifying a value between 0 to 1023 (for a 10-bit analogue-to-digital converter) based on dark to light; hence in a pitch-black room, the photo-resistor should read 0 - therefore in a very bright room, it should read 1023. We can then convert this to a percentage using very basic maths:

The wiring of pins on the TMP36 [b]does matter[/b]; with the flat-side of the TMP36 facing you, the pins should be wired in the following order:

The TMP36 will also output a value between 0 to 1023 (for a 10-bit analogue-to-digital converter); we convert it to celcius using the following formula:

To convert our 3.3v analogue signal to millivolts, we use the following formula:

Hence we end up with the following formula to convert the raw analogue signal to a temperature in celcius:

The code I wrote to read the TMP36:

I did try the following with the WirePi library:

Even though no errors were thrown and the setup was successful, I could not set a GPIO to high; additionally this had to be set after every build. Instead I simply did:

…and then I connected, via remote development, using the root account. The above command sets the password for the root account, which by default is not set on Debian squeeze (the distribution used on my Raspberry Pi).

This is bad security practice, however the Raspberry Pi was on a secure network and the context was strictly for debugging. You can alternatively, apparently, install the WirePi library as programs, which can be executed without sudo/super-user privileges, however I decided against this due to decreased speed.

I would recommend purchasing a digital multimeter and testing your circuits; for this binary clock, I used sockets (which are used to hold integrated circuits such as the 74HC595 shift-register). I would then leave the sockets empty and use my multimeter to test the voltage through each pin to check no pins were touching. Using a socket will also prevent heat-damage to the IC from a soldering iron.

Below are a collection of links I found to be useful during this project; some of these links may contain articles written more towards your learning-style or contain more technical information.

The source-code for this project can be found at Github:

The binary clock presented in this article is version two, with the original version created using a Netduino. Below are some historic pictures, before the final binary clock.